Save The Builders Tea

Save The Builders Tea 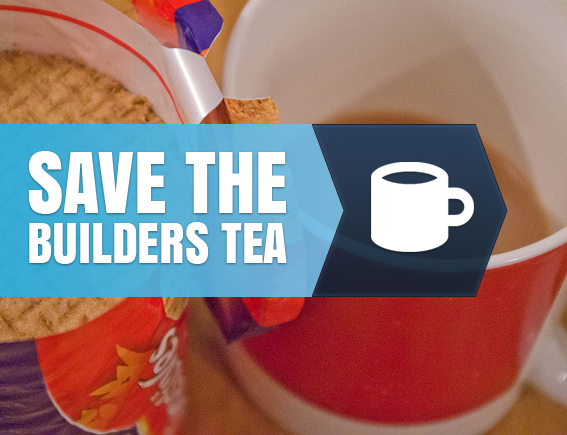 Tradition states that builder's tea is the stuff the Empire was built on. It fuels our plumbers, electricians, carpenters, tradesmen and, yes, builders. Here at FloorSave we couldn't agree more!

British tea is an extravaganza of flavours and styles, unmatched anywhere on Earth. Depending on where you are in the country, "normal" could mean anything from hard water brews like Yorkshire to classics like PG Tips. In some places, asking for a so-called regular tea could even result in a cup of Earl Grey or finest camomile.

The Tea Council is the closest the UK has to an Official Department of Tea. Their website contains facts and figures on more brands of tea than there are stars in the sky. They run an unofficial "tea counter" to measure how many cups have been drank in Britain each day (nearly 160million apparently). So what do they have to say about the UK's finest brew? Err... nothing.

The Tea Council refuse to recognise builder's tea as a real drink. Their website has category lists for Breakfast Tea, House Tea, Afternoon Tea and Chai Tea, but nothing a tradesman might recognise as his morning cuppa.

The problem is that the name is too vague. The Council takes pride in precision and nothing is more ill-defined than this classic British brew. If you really try to get down to the nitty gritty, they'll admit over 160million "standard" cups of tea are drank in Britain every day. Is this a clever way of disguising the name "builder's tea"? Sadly not: by "standard" they just mean it comes out of a bag.

In 20 years time though, all this might not matter. Last year, a survey by Covers Timbers and Builders Merchants found 44 percent of modern British builders prefer coffee to tea, with the numbers growing every year. Today, nearly half of all builders are as likely to order a foamy latte or cappuccino as they are an old-fashioned brew. Of the 56 percent who still drink tea, 45 percent refuse sugar and 11 percent prefer the refined taste of Earl Grey to other brands. That means there are more builders in the UK who will feel disgusted if you serve them up a classic builder's tea than will be grateful.

We want to start this petition as we feel that the Builders Tea should be recognised by the stuffy uptight Earl Grey drinking Tea Council whose taste buds would no doubt explode at the faintest whiff of a proper tea. A builder's tea is what makes us great! It's as British as wet weekends or spending your summer hols in Spain. It's so good even A-listers from across the pond like Jennifer Lawrence drink it!

So come on lads, put those continental cups down and get a proper brew in you before it disappears like Brazils back 4!